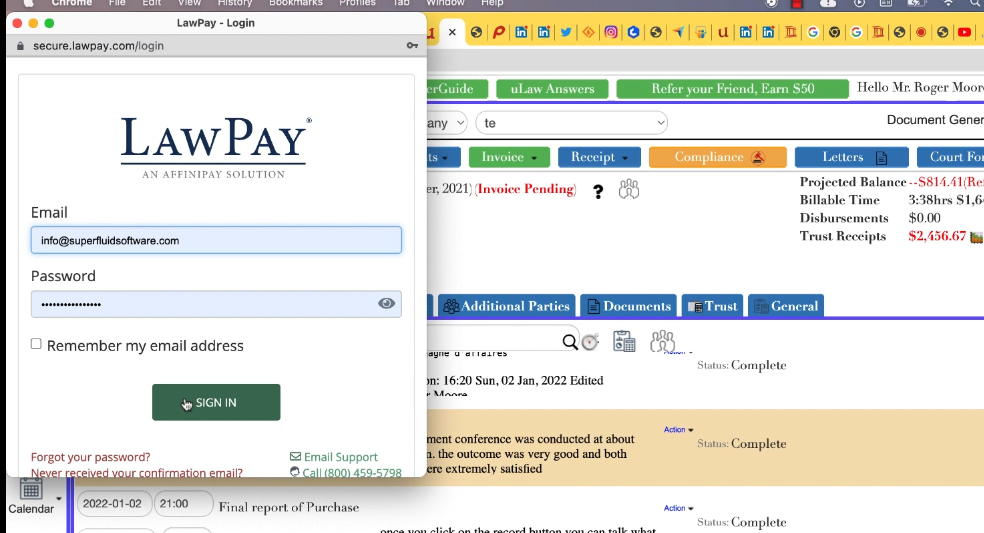 In this article we’re going to tell you about how LawPay’s “QuickBill” feature works with uLawPractice under the hood. The end result is a seamless flow whereby uLaw sends your client a QuickBill which they can easily pay into the right bank accounts that your firm is using.

The client billing process can be tricky sometimes depending on whether or not you’re using a trust account. But with digital payments built inside of uLawPractice, it can be easy and convenient for your clients to pay you into your proper accounts, which means cash flow for your firm can be undisturbed and automated in a digital environment that your clients are used to seeing.

On the first instance of the initialization process of integrating LawPay into uLawPractice, if you go to the “matter” (blue left-hand column) button, LawPay’s login screen will show up as a small popup within the main screen. Take a look below, you should see something like the following:

After that login process is completed effectively, you’ve established a connection between the two pieces of software. This means that whenever you generate subsequent retainer letters, trust requisitions and so on, uLaw will be generating a LawPay QuickBill.

This QuickBilll will automatically go into the trust account directly through ulaw. Note, in order to use QuickBill, an email address is mandatory to be added to your contact’s profile within uLaw. This is because it will be sending the bill to that person’s email address, and that’s how you get paid.

When you’re confident that the contact you are dealing with in your matter section has an email linked to their profile, you can carry on generating a trust request.

Supposing you have a contact, Strawberry John Shortcake, a former worker at Slip and Fall Construction, and his email is johnstraw@shortcake.net, if you visit the “Document Generation” button (in the top right of the screen under matter) and create a retainer letter for example, the downloaded form that you have generated will automatically have a hyperlink included in the form that will let your client pay you through QuickBill whenever the visit the link.

See below image as an example of that digital retainer letter downloaded via uLaw, which integrates QuickBill into the letter itself: 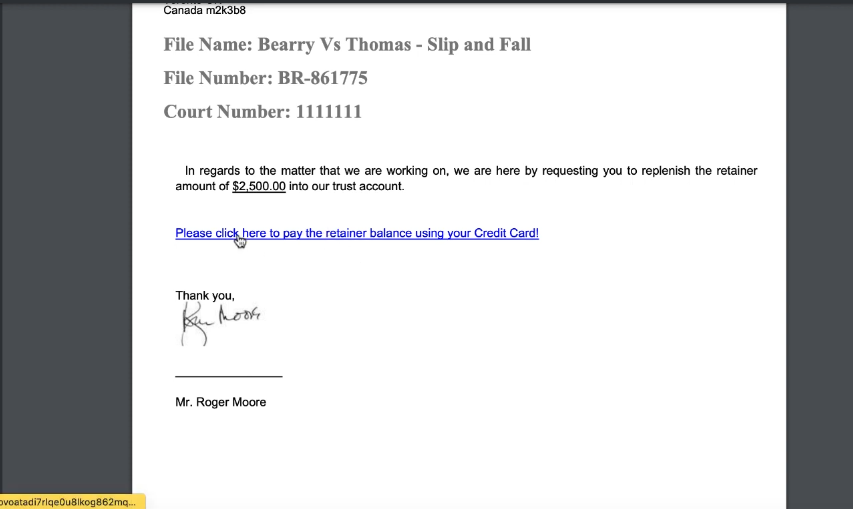 The blue hyperlink is what the client will be visiting. Whenever they click this, it will show the invoice amount and it'll give them an opportunity to pay, just like any other bill that they’re familiar with paying online such as amazon and so on.

This same process can be repeated with invoices as well. If you have a flat rate that you want to bill out to a client, you are able to carry on as usual with the process of generating that document. Just, this time, whenever your client gets the invoice there is the ability for them to digitally pay.

The special part about this integration is that if you actually go to QuickBill, the QuickBill screen will show you that your payments are divided based on the type of payment your client made. A retainer will not be sent into your business account, because that would be inappropriate. Conversely, an actual payment by your client for services already rendered, can be sent to your bank account.

Take a look at the below screenshot as an example of this logical and automated division that takes place if you use such digital payment gateways with uLawPractice:

Whenever you go to lawpay, you’ll be able to see the status of your trust transactions. The raising of invoices doesn’t have to be difficult, and this process actually cuts down on a lot of administrative time that would otherwise be spent chasing after payments and validating whether they’re in the right place or not. Software can do this for you, and this is the reason for such an integration.

Click here to watch an informative video about this process